The Goes Down on a Foot Fetish Run.

On On: on site by local Chinese.

The Run: It was good to see Boo arrive, as many of the old timers looked around nervously at the run site – we could forsee a Police visit given the enclosed nature of the site.

The run went out the front entrance and back in the back entrance. Between that it is a bit hard to be sure, the run covered a lot of new territory and not much of it was familiar. In addition, “someone” had monkeyed with the run, putting arrow heads on both ends of arrow marks, putting T-checks where there wasn’t supposed to be one, and mucking with circles. I think we went over Outram Hill and Pearl’s Hill, we certainly circumnavigated the Pinacle @ Duxton, and we went through a lovely shophouse area which may have been Blair Lane. We definitely ran through the old marshalling yards from the KTM railway station (quick, run through it before they put a condo and a shopping centre there), then along the start of the green corridor back to Bukit Merah before heading back home. Nice run.

The Circle: Goes Down Easy, who also accepted subs and fees earlier, is the stand in GM (again). And oh my, that’s what I call a pair of F#*k Me Shoes. A special award for bravery for wearing them on the car park surface, which might explain why GDE was so keen to move the circle to the centre of the car park. 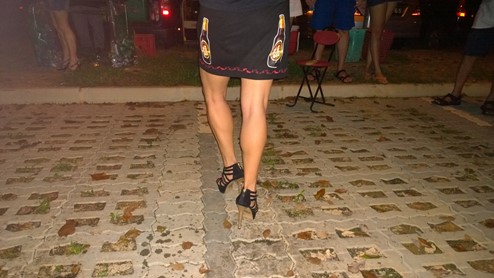 Crikey, so what did we think of that for a run? Back to front arrows, too short. Good run.

Tell us about your On On: On site Chinese food, free beer if you stay.

Next Week’s Run: AGM run by Comes Quietly, top of Jalan Gaharu (near Mayfair Park). (Comes Quietly was checking out the free beer as his name was called).

Dick: in a bag with Sweet Thighs, who is handing them on for Ditch. Had been planning to give them to the GM, which was made more easy as she went to her car and Goes Down Easy told her “oh, I need that Dick so badly”. Goes Down Easy complains that she has too many jobs tonight – collecting money, haring, and being the GM. So Goes Down Easy calls Forced Entry into the circle to join her for a drink – for giving her all these jobs.

This entry was posted in Runs. Bookmark the permalink.